The Kid: What Happened After My Boyfriend and I Decided To Go Get Pregnant 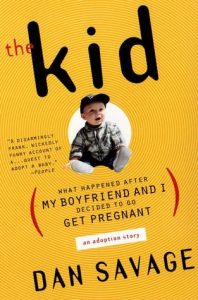 Dan Savage’s nationally syndicated sex advice column, Savage Love, enrages and excites more than four million people each week. In The Kid, Savage tells a no-holds-barred, high-energy story of an ordinary American couple who wants to have a baby. In this case, the couple happens to be Dan and his boyfriend. That fact, in the face of a society enormously uneasy with gay adoption, makes for an edgy, entertaining, and illuminating read. When Dan and his boyfriend are finally presented with an infant badly in need of parenting, they find themselves caught up in a drama that extends well beyond the confines of their immediate world. A story about confronting homophobia, falling in love, getting older, and getting a little smarter, The Kid is about the human desire to have a family.

Dan Savage’s book “The Kid: What Happened After my Boyfriend and I Decided to Go and Get Pregnant” is full of laughs, interspersed with his bouts of anxiety as he and his boyfriend Terry move through the adoption process. Be forewarned; this is not the typical sentimental memoir of creating a family; it is full of humor, heart, and many off-topic discussions about Dan and his partner’s own “character flaws,” which make them even more endearing humans. This honesty underscores the fact that imperfect people can adopt and be good parents.

The memoir begins with how they decided to adopt and then explains why they decided to pursue the open adoption of an infant through a private agency. Written in 1999, the first important step was finding an agency to license and actively support LGBTQ couples. He and Terry chose open adoption because they saw no reason not to have the birth mother present in the child’s life. Savage details the initial seminars with the adoption agency, the agony of waiting to be picked by a birth mother, the fears that she might change her mind, and the awkwardness of the burgeoning relationship with the homeless “gutter punk” birth mother who thought a gay couple would be perfect parents for her baby. Due to society’s prejudices, Dan imagined that he and Terry would never be picked and didn’t feel quite prepared when it happened so quickly. Throughout the process, he shares how he tried to keep his emotions at bay just in case something went wrong, but by the end of the book, his detachment evolves into the sentimentality that all parents feel when bonding with their children.

Whether you have already adopted or are just starting the process, this book shares intimate details and insights that you may recognize in yourself. If you enjoy bawdy humor and a page-turning tension at times, this could be the perfect book for you.